Dear friends and saints of the Lord Jesus the Christ,

I am going to set out the reasons, according to prophecy of the Scripture; King James Bible, why I am certain that Donald Trump will become the 45th and last elected president of the United States of America.

(Added 10-13-20165) That is folks, if Obama is not successful in the Talmudic bid to instigate their false war of Gog for Sinai-Gog, which is actually the war which will culminate into Armageddon.)

To me, it does not matter one way or the other, for my King is far away and will send his angels for me and the saints soon, whether I am dead in Christ are alive and remaining. So this article has no bias whatsoever, just facts. I think both candidates are spawn of Hell, neither has said Jesus is KING of Kings, Lord of Lords. But has made their god, mammon.

The evangelicals have went into total abject complacent apathetic apostasy as per KJV 2 Thes. 2. The great fallen away, in that they believe that the day of the Lord is imminently at hand before the Man of Sin, that son of Perdition is “revealed”. Thinking to be secretly raptured away before the 7th sounding of the Trumpet of the Revelation of Jesus the Christ unto John his servant on the Isle of Patmos. Also see 1 Cor. 15:51-58, 1 Thes. 4:13-17, Rev. 20:4

10 And with all deceivableness of unrighteousness in them that perish; because they received not the love of the truth, that they might be saved.

11 And for this cause God shall send them strong delusion, that they should believe a lie:

12 That they all might be damned who believed not the truth, but had pleasure in unrighteousness.

BiBi Netanyahu and his far right wing Talmudic Hassidic settler Chabad Government is in total agreement with Talmudic Law as opposed to secular zionist marxist commune socialist law. Netanyahuu fully backs Satan’s Sanhedrin’s desire for the restoration of so called Eretz Israel, from the Nile to the Euphrates and then total subjugation of all non jewish nations. These are anti-zionist and hate the whore Aholibah.

Bi Bi receiving his marching orders from Schneerson, the leader of the Chabad Lubavitch Sinai-Gog of Satan.

The 102nd US Congress and the then President of the USA, George Herbert Walker Bush, also received their orders by  the spawn of Satan to superceed the Constitution FOR the United States of America, March 26, 1991, to be used to subjugate the Nations of the earth to these Talmudic sons of the Sinai-Gog of Satan

President Bill Clinton furthered the global scheme in the year 2000 with the manufacture of the fabricated Y2K scare. This consolidated all Buy and Sell corporations to the Beast to come, KJV Rev. Chapter 13, Sanhedrin.

(Keep in mind that since the year 2000, many revisions have been made as prophecy was revealed)

Thereafter George W. Bush was appointed as president of the USA by none other than this viper Schneerson of Chabad Lubavitch who also brought forth the prophesied Sanhedrin Beast.

The Rebbe’s Revolution In 5762

Ten years passed. On the one hand, world-wide terror increased. On the other hand, the world continued to progress towards the time of the Rebbe Mendel Menachem Schneerson’s revelation. Somehow, the Rebbe arranged it so that Bush’s son would become president too and complete what his father left unfinished.

The Great Wars of Satans spawn was then set off by deception, the slaying of over 3000 US citizens by the MOSSAD and CIA, given approval by the murderous Treasonist Bush Ad-menustration and Talmudic so called “Neo cons’ (jews and proselyte freemasons). Millions of innocent muslim women and children were slain by this Talmudic Satanic led treachery. Millions more made refugees against their will.

The apostate evangelicals who back Trump, also deny the Gospel of Christ the Everlasting Holy Covenant, in agreeing contrary to the Scripture, that the jews do not need Jesus the Christ to have redemption, that they have their own covenant. These also say the jews who reject GOD, Emmanuel are God’s chosen, totally denying KJV Galatians 3 & 4.

These have fallen for the fables of the jews. KJV Titus 1:14 and the Leaven of these Hassidic Pharisees,..KJV Matthew 16:6-12. By the Talmudic “Chosen” these have had their bloodlust ire risen by design, they shout “Kill em all” Kill all of the Muslim, of course in their Judeo-Jesus’ name.

The Orthodox Right Wing Hassidic Pharisee Chabad Lubavitch jews in the USA and in Itsreallyhell unanimously back Donald Trump.

Trump says he will make the bloody whore city, jerusalem the capital of these Hassidic Talmudic jews of itsreallyhell. This will give the Sanhedrin Authority over the so called Third Temple mount site to build their coveted third Temple of Doom to make way for their false Messiah, the Man of Sin, False Christ, Moshaich Ben David, AKA, Lucifer. http://www.breakingisraelnews.com/77140/trump-supports-jewish-claim-jerusalem-white-house-clinton-decry-resolution/#LlFGzqY3DYyl8yLw.97……&#8230;.Trump and Vladimir Putin will be part of one big family….(Schneerson portrait) 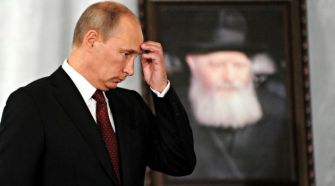 6 Wherefore thus saith the Lord GOD; Woe to the bloody city, to the pot whose scum is therein, and whose scum is not gone out of it! bring it out piece by piece; let no lot fall upon it.

7For her blood is in the midst of her; she set it upon the top of a rock; she poured it not upon the ground, to cover it with dust;

8That it might cause fury to come up to take vengeance; I have set her blood upon the top of a rock, that it should not be covered.

9Therefore thus saith the Lord GOD; Woe to the bloody city! I will even make the pile for fire great.

10Heap on wood, kindle the fire, consume the flesh, and spice it well, and let the bones be burned.

12She hath wearied herself with lies, and her great scum went not forth out of her: her scum shall be in the fire.

Israel is now ruled by Dan, the Serpent by the wayside, Samaria, the Hassidim, the Pharisees, Sanhedrin, Aholah, orthodox;  Genesis 49:17,  KJV Ezekiel 23

The “Beast” of  KJV Revelation Chapter 13 is Sanhedrin. The ten Kings who when they “Reveal” their false Christ over the earth’s strata, will become as kings in one hour with the beast.

You will not be permitted to live in this Talmudic Hassidic Satanic Order of their False Messiah unless you reject and deny Jesus as the Christ, IAM Deity of God.

“It is our duty to force all mankind to accept the seven Noahide laws, and if not—they will be killed.” (Rabbi Yitzhak Ginsburg, Ma’ariv, October 6, 2004)

The coveted King of the Talmudic Hassidic anti-Christ jews, plan….

KING OF THE JEWS

9. Only the king and the three who stood sponsor for him will know what is coming.

I have repetitiously and tirelessly shown that Aholah is the Pharisees who crucified Jesus Christ, they the Chabad Lubavitch boast they are the continuance of the Pharisees and how they loathe Christ Jesus and his saints. Aholah the whore is Dan, who now rules Judea and Samaria.

Aholibah is Judea, she is secular zion, atheist, social Marxist, but now that Aholah is in control, her tent is in Dan, they seek to rebuild their high places unto Molech, their Shem god wannabe.

The Sanhedrin has announced for the first time in 2000 years their so- called Jubilee, rejecting the Jubilee and the accepted year of the Messiah Jesus the Christ who came in the name of the LORD. Thus they seek another who will come in his own name, shewing himself as God in their Temple of their g-d. They announce that the Jubilee is of their Moshiach, False Christ.

http://www.breakingisraelnews.com/46741/messiah-jewish-jubilee-redemption-jewish-world/……”In the absence of the majority of the Jewish people living in the Land of Israel in their tribal lands under the leadership of a Sanhedrin, the Jubilee year has no practical significance in Jewish observance today. The universally accepted declaration of the next Jubilee year waits for the Messiah’s arrival.”

Under current prophetic revelation, it is impossible to await another 49 years for their False Messiah, but their Hassidic Sanhedrin, who God has put in their hearts to give their power unto the beast and who get their authority from the beast to prolong the “Revealing” of this Man of Sin, Son of Perdition, thus their fabrication the ensuing War of GOG MaGOG, and is not but is Armageddon.

In the Book of the Prophet Daniel Chapter 9-10-11-&12, the Prophecy of the Last days, there is no “SHE” (Hillary Clinton) mentioned, only the “HE’S. Also as well in the Revelation of Jesus.

Hillary is of Aholibah’s camp, she is a Marxist, socialist Communist, zionist, secular atheist.

The camp of Aholah, the Orthodox, Chabad Lubavitch or the Beast Sanhedrin will never allow her to become the 45th President of the USA, for their window of the abyss is now.

10 And I fell at his feet to worship him. And he said unto me, See thou do it not: I am thy fellowservant, and of thy brethren that have the testimony of Jesus: worship God:

for the testimony of Jesus is the spirit of prophecy.

11 And I saw heaven opened, and behold a white horse; and he that sat upon him was called Faithful and True, and in righteousness he doth judge and make war.