I am very happy to report the email from Texe Staff @ power of Prophecy;

Yes, Texe is getting better day by day. The good news is that there doesn’t appear to be as much damage to the heart as they originally feared. He actually came in the office yesterday and recorded a new program for this weekend. Thank you for your prayers.

Thank the Lord for his strong heart and once again Texe has driven the wooden stake right into the heart of Satan and all of his worshippers.

In fact, the Judaizers hate the jews and not only shut the door of the Kingdom of God in Heaven to the jews, they have also shut themselves out.

It is the truly faithful in Christ Jesus the Lord who so love the jews to tell them the Truth that we put our lives on the line these days, in his Mighty Name.

A Novelette By Texe Marrs

It was the Devils Annual Convention and Expo and devils had come from all over planet earth and from even more distant locations to meet, socialize, and make plans for the future.

There was at the Convention an undercurrent of excitement. Satan had promised a reward to the devil or demon who came up with the best idea to capture men’s souls. All the participants were thrilled at the prospect of winning this great award and had burnt a lot of midnight oil honing and sharpening their creative skills, to come up with fresh new ideas.

At the appointed time, each of the devils came forth, bowed before their Master’s gold-gilded red throne and presented their idea, competing with their peers for the great prize and reward. Azalel, Behemoth, Consternatus, Nefertitti and the others—each came, one by one and laid out what they had conceived as the best way to orchestrate the capture of men’s souls.

The Master was not happy. Not a single devil had come up with what he considered even a minimally acceptable idea. Impatient, angered, belching streams of fiery sulfur, Satan screamed, “Is there no-one here able to appease my sick and evil, yet exquisite tastes? Is there no one who has devised a sure-fire plan we can use to successfully thwart the will of God and conquer souls?”    Satan listened intently to each presentation; he sometimes made constructive comments, but, on occasion, would lash out at the devils who had come up with stupid or unworkable ideas and fantasies. Outraged with anger, the horned one vented a mixture of fire, lightning, and steam directed at those with whom he found fault. Some were singed; a few unfortunate servants were burned to a crisp.

Then, from the vague shadows, a stealthy, lean figure approached the throne. All eyes focused on him for he was known far and wide in the nether regions as a resourceful, crafty, and deceitful character, second in horrible imagination only to Satan himself. The throng gasped for breath. They stood in rapt attention as Beelzebub, the Prince of Devils, spoke slowly but with authority.

“I have devised a plan, my Lord,” said Beelzebub, “which cannot fail to ravage and divide the Christian Church. It is so wickedly crafted that it will actually cause many who say they are of Christ to applaud the most heinous of sins. They will even torture, rape, plunder, and kill their fellow man, all the time thinking they do God service.” 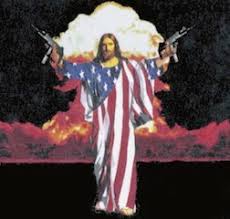 “Splendid!,” Satan exclaimed. His reddened eyes flashing, his muscular chest pulsing in expectation, his sweaty palms and chest dripping with perspiration. “Tell us your plan,” he implored.

“As you know,” Beelzebub began, “many Christians have been led by devils to embrace the Jews and Israel as ‘God’s Chosen People.’ These deceived Christians thus ignorantly believe that God is a racist who counts the Jewish race as special and superior to all others—even as divine.” He cackled for a brief moment. “We have successfully taught the Christians to honor not only the wickedness of the Jews but also their anti-Christ religion, Judaism. Moreover, these stupid Christians are now led by their pastors and evangelists—many of whom are men secretly instructed by we devils—to believe that the land and territory known as Israel in the Middle East is Holy and Beloved of God. They call it the ‘Holy Land.’”

“Yes, yes, this is true,” Satan agreed, roaring with laughter. “These so-called Christians are exceedingly stupid.”

“Well,” Beelzebub continued, “this deceit and stupidity can play in our favor. Now Jesus, the One who torments our days, haunts all our dreams and so often fouls and throws a wrench into our infernal schemes, once accurately told the Jews, ‘Ye are of your Father the devil, and his works you will do.’” “That declaration by Jesus,” noted Beelzebub, “is even recorded in the Gospels of the New Testament.”

“Thus, we have created in the unlearned Christian an impossible contradiction. On one hand we have taught them that the Jews eternally are ‘God’s Chosen People.’ We have created the impression that Jews are more Holy than other people, even divine, and that the earthly geographical sites of Israel and Jerusalem are equally Holy and of divine status.”    “So, go on,” Satan intoned, “tell us more.”

“With smooth tongues, we have whispered in their petulant, itching ears that Jesus surely did not tell the Jews, ‘The Kingdom is taken from you and given to another nation bearing the fruit thereof’” (Matthew 21:43). “We have suggested that exactly the opposite is true—that no matter how grievous their sin, no matter how horrendous their betrayal of Christ, the unrepentant Jews remain most worthy and Holy of all people, chosen by Him to receive the Kingdom.”

“Though Christ told the unbelieving Jews they were not the children of Abraham, but rather the children of Hell, we have sown doubt in their minds, ‘Are God’s gifts not eternal?’ We have suggested, ‘Are the Jews not chosen, forever and ever?’”

“And our lies have borne fruit for many Christians believe in our false teachings and have abandoned belief in the Scriptures that say otherwise.” “Hmmm, true,” the devil nodded in assent.

“Now here is our opportunity,” Beelzebub continued, wetting his hot and puffed-up lips with his long, wart-filled tongue. “Jesus declared that the Jewish Nation now belongs to Satan’s kingdom. He openly stated—and it is recorded in Matthew 23:38 and 24, and in Galatians 4:19-31—that the House of Israel would ‘be left desolate’ until His return, that the Temple of the Jews would be thrown down and that they would be dispersed throughout the world, a cast-out people, in bondage to us, the devils.”

Satan stiffened and leaned forward as if to savor every word he was hearing.

“This, then, is my Plan. We must pressure the Christians to continue, even to reinforce and amplify the unscriptural teachings and doctrines we have so far taught their itching ears.”

“We will cunningly persuade them that Jesus was wrong about the Jews and the House of Israel. We will encourage the Christians to endorse and support the Jews in their devilish works and activities. We will even convince Christians that it is their duty to gather all the Jews and return them to the ‘Holy Land,’ and to rebuild the cast-down Temple.”

“And when the Jews vow—as they will because their Father, as Jesus said, is Satan—to intensify their evil works of plunder, rape, lying, stealing, and murdering under our direction, we will insist that Christians applaud the Jews, support them in these wicked things. Even make idols of their leaders and their rabbis. For after all, is it not so,” he cackled, “that the Jews and Israel are Holy and are ‘God’s Chosen People?’”

“We will go so far as to cause the Christians to avidly support the Jews who stubbornly cling to Judaism and despise Jesus as their ‘Elder Brothers in the Faith.’ We will suggest to the deceived Christians that Jews are not, as are Gentiles, part of the Gospel Plan, that Jews are saved and live eternally secure and happy lives apart from Jesus.”

“It will be our contention that even though the Jews, under our tutelage and monitoring, do spit on Jesus and defame and defile Him in their most holy book, the Babylonian Talmud—ah yes, bless its infernal name—the Christians will, nevertheless, praise, honor, and exalt the Jews, Judaism, and the chief rabbis.”

“In sum, my Lord and fellow demons, my Plan is to promote a new theology, to be called ‘Christian Zionism.’ In this new theology, evil becomes good and good becomes evil. Black is white and white is black. Christians will actually hold aloft on their shoulder the people whom Jesus correctly titled the ‘Synagogue of Satan’(Revelation 2 and 3), and amazingly, these deceived and tolerant Christian rebels in due time will cheerfully, at our urging, declare the Synagogue of Satan to be made up of God’s Chosen, His very own.”

“It is our duty to force all mankind to accept the seven Noahide laws, and if not—they will be killed.” (Rabbi Yitzhak Ginsburg, Ma’ariv, October 6, 2004

At this, the infernal Master rose up from his throne; a smile was creased across his ugly and repulsive face.

“You have done it again Beelzebub!,” he enthusiastically bellowed. “The Grand Prize is yours. Imagine Christians who are Zionists, who exalt my worst and most evil-doers in the very name of God, who erect an idol in the name of Israel, and who in their ignorance turn the love and goodness of God into licentious deviltry.”

“So mote it be,” a happy and smug Satan, in wild ecstasy screamed out. And the devils of Hell cheered. They marched and chanted, partied and danced wildly.

And they sang in unison a brand new song, the lyrics and tune of which seemed hauntingly familiar, yet, somehow, grotesque, and unfit: “Onward Christian Zionists, marching as to war, with the lies of Satan going on before…”

And far up above, in Heaven, the angels stood solemnly side by side before the throne in unison affirming, “Thou art worthy, O Lord, to receive glory and honor and power… Yes, worthy is the Lamb!”

And a voice like thunder was heard, exclaiming, “The Christian world is full of Zionist apostasy.” It cried out, “Did not our Lord warn of these things, and prophesy, saying, ‘If it were possible even the very elect will be deceived?’”

And the Great God who sat on the Holy throne was heard to say,

An example of the hater of Christ, His Gospel, his saints and the jews,  a pot calling the kettle black, a wolf guarding the hen house….