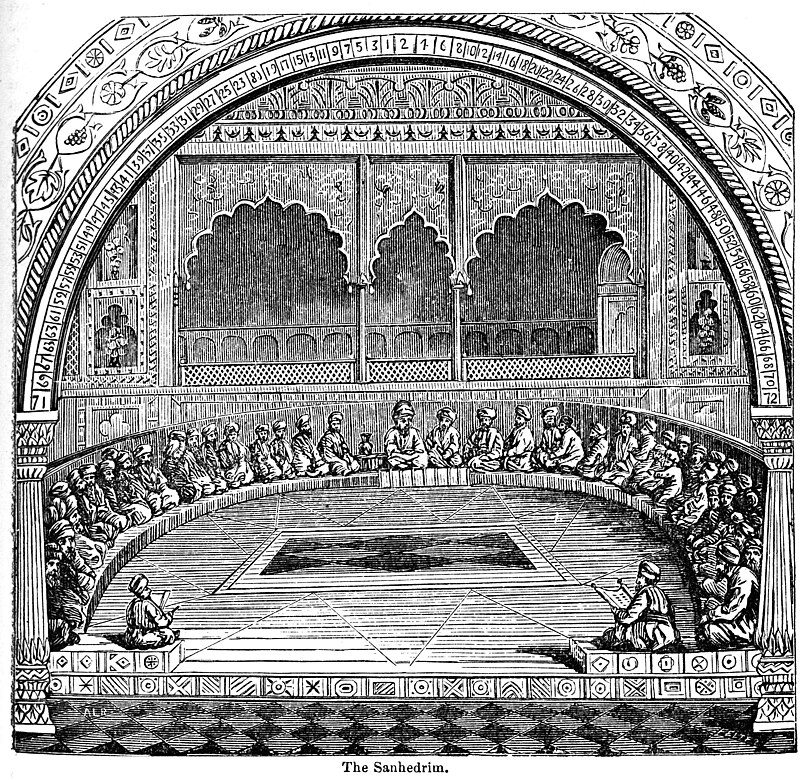 If this fails, Google search ; Thomas Library, type 102nd congress, then type schneerson, it will pull up the text for this legislation.

These Laws are derived from Babylon and are taken from the Judaic anti-Christ Talmud Bavli or Babylonian Talmud.

In this rapidly developing One World Order (H.W Bush) these laws will be enforced. Any who do not submit to these anti-God laws will be punished. In the Tractate Sanhedrin of the Talmud Bavli, it is clear that the only punishment to be meted out, will be death by decapitation.

On October 13, 2004 the Pharisaic anti-God, anti-Jesus Christ, Sanhedrin was revived at Tiberias, Israel and later moved to Jerusalem.

and under the heading Courts for Noahides:

and under topic “What is the meaning of the Noahide Oath?” That any who worship Jesus as Deity, the Lord God Almighty, will have broken the law.

What about those who hold “that person” is messiah?

Question: What about those who hold “that person” is messiah?

People who hold that he is not and was not any part of a divinity, but still holds that he was a messiah.

Answer:” It is the opinion of Rabbi Schwartz that a person who believes that “that man” was a messiah is not transgressing any prohibition. However the issue is as follows: someone who believes that “that man” was a messiah seems to be only partly disassociating himself from full christianity, and there is a problem of what is meant by the term “messiah”. Is the messiah a “divine messenger” to “save” the world. Now when I say “a divine messenger” I mean someone – otherwise normal human being – sent by “the divinity” as a messenger. It seems that some people mean “a person with divine attributes”!

An issue which could be seen as semantic becomes of major consequence.

The decision of Rabbi Schwartz is therefore that in the beis din over which he presides he will not accept declarations of people with christian background if they think that “that man” was a messiah. This DOES NOT MEAN that the declaration of such a person before any [other] beis din is valueless. Perhaps another beis din will be satisfied that the person before them is bona fide in acceptance of the totally non-divinity of “that man”. They may accept the declaration, and it will be fully valid

Sorry Satan, that man Jesus Christ is LORD GOD ALMIGHTY, cut on the dotted line you whited vipers of Hell.

The Sanhedrin has 10 members who are in authority over the entire group of 71 who set upon the seat of another “fictional Moses”. These racist are fables of the Jews, beware.

Most all of the so called MSM, TBN preachers and many others propagate an over hill, over dale coming prophecy of a revived Roman Confederacy of 10 Nations and a so called anti-Christ to come on the scene. This is complete hogwash, for scripture, The Revelation of Christ Jesus, clearly told us in Chapter 13 exactly what would unfold.

Sanhedrin, revived. The ten horns and seven heads are:

The VILNA GA’ON supports Rashi’s interpretation. He explains that when the Sanhedrin convenes, ten of its most prestigious members sit in the middle of the group, surrounded by the other sixty. Those are the “sixty mighty men” who surround “the bed of Shlomo.” (Solomon) (The ten in the middle correspond to the seven “Ro’ei Pnei ha’Melech” and the three “Shomrei ha’Saf” in the court of a mortal king who are closest to the king, who correspond to the ten in the court of the King of kings; see Megilah 23a. The verse in Melachim II (25:19), which associates these authoritative members of the king’s court with sixty other men, appears in the context of a discussion of the members of the Sanhedrin.)

Here are the seven:

See Protocols of zion, “The Three who will stand for this counterfeit Christ” “Shomrei ha’Saf” (So called forgery, is dead on as to these happenings).

The Governments of the UN Security Council merged into One Order, One anti-God global religion. The leopard-France & Germany, The Bear-Russia, the Lion whose wings were plucked as an Eagle, The UK and USA

The Sanhedrin boast that they have sole authority to anoint by oil their king, who will be known as Moshiach ben David, AKA, false Christ. Search google and see how their Moshiach must duplicate this death, as Did the Lord God was resurrected.

These men worship Satan, their father.

Watch and pray and you will know, when they Reveal that Son of Perdition, 2nd Thes. 2

6 And he opened his mouth in blasphemy against God, to blaspheme his name, and his tabernacle, and them that dwell in heaven.

7 And it was given unto him to make war with the saints, and to overcome them: and power was given him over all kindreds, and tongues, and nations.

8 And all that dwell upon the earth shall worship him, whose names are not written in the book of life of the Lamb slain from the foundation of the world.

11 And I beheld another beast coming up out of the earth; and he had two horns like a lamb, and he spake as a dragon.

This is the Son of Perdition, false Christ prophet who will herald the “Revealing”

The Great Sanhedrin alone had the right to appoint, or confirm the appointment of, the high priest. His consecration might take place only in the day-time. Two high priests must not be appointed together. Every high priest had a “mishneh” (a second) called the Segan, or “memunneh“, to stand at his right; another assistant was the “Catholicos“ (“Yad”, l.c. 16–17).

12 And he exerciseth all the power of the first beast before him, and causeth the earth and them which dwell therein to worship the first beast, whose deadly wound was healed.

13 And he doeth great wonders, so that he maketh fire come down from heaven on the earth in the sight of men,

16 And he causeth all, both small and great, rich and poor, free and bond, to receive a mark in their right hand, or in their foreheads:

17 And that no man might buy or sell, save he that had the mark, or the name of the beast, or the number of his name.

18 Here is wisdom. Let him that hath understanding count the number of the beast: for it is the number of a man; and his number is Six hundred threescore and six.

The Sanhedrin has recently summonsed Pope Francis (Catholicos) and President Obama to trial in jerusalem for crimes.

I believe that both will submit under authority of the Dragon, to begin global enforcement of these anti-God murdering laws against the True living saints of Christ Jesus, the LORD GOD ALMIGHTY. In fact each year the president of the USA makes a proclamation re-enforcing this grand scheme, and the Vatican has already submitted:

The Iran Nuclear deal will fail for the ensuing war of Sanhedrin, (False Flag, blamed on  Iran) to usher in the New (old) Babylon order.

The deceived mass of the evangelicals as well as the Catholics and all organized religion have been led into apathetic apostasy by the Judaizers and their fables of C.I Scofield and Darby, Hagee, etc. They fell for the deception of a mystical rapture to occur before the 7th Trump. These are not prepared for the Tribulation, and Matthew 24 clearly tells us that these proselytes of the jews will deliver us up.

You will have the choice to accept the MARK of the beast name, his name Moshiach ben David, His Mark, that star of Remphan and Chiune which they made with their hands, the Magen David. Tattoos are the fad, beware of the MARK of His name.

Even so, Come quickly Lord Jesus.